Warning: this has all the gory details of the labour and birth! 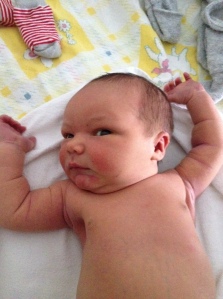 Our beautiful little boy, known as Archie, Archiepoo, Argy-bargy, Archatron and Little Man, was born last Thursday June 7 at 5.34am at the birth centre at the Mercy Hospital in Heidelberg, weighing a whopping 4.4kg or 9lbs 11oz. He is 55cm long and has a head circumference of 37.5cm, which is bigger than the midwife had ever seen before!

I was having heaps of Braxton Hicks contractions on Tuesday and Wednesday, and had a feeling that the baby would be making an appearance shortly. On Wednesday afternoon at about 5pm, my mum and grandma called in for a coffee, and the contractions got more regular and stronger. We started timing them and they were about 10 minutes apart, but not particularly painful. I called Lee and told him he should probably come home. I called the birth centre and they said to call back when the contractions were about seven minutes apart and that I would be definitely having the baby that night!

Over the next two hours or so, the contractions started getting closer and closer. We got into bed and tried to sleep, but by about 10pm the contractions were five minutes apart and really painful. I was using TENS machine (a little machine that sends a mild electric current through electrodes that you stick to your back) which helped a bit as it gave me something to focus on. I was trying to get in the zone and just breath through the contractions, and that helped a lot.

Eventually I gave up on getting to sleep and got in the shower on a stool. I had a shower cap on and the noise of the water hitting the shower cap was a good distraction from the contractions. I was in the shower for about two hours, and was starting to get loud and screamy. Lee was still snoozing at this point, until I yelled out that we needed to get to the hospital NOW. This was at about 2.20am. I had gotten an outfit ready to wear, but there was no way I was putting on the leggings and boots and scarf and jacket that I had laid out. Lee bundled me into pyjamas and a dressing gown and we got in the car.

The car trip was probably the worst part of the whole labour. I was having full on screaming contractions at that point, and we had to go over two train lines, tram tracks and several speed humps to get to the hospital.  Lee parked in the drop-off carpark right at the front of the hospital doors.

We pressed the after-hours button (well, Lee pressed it and I bashed it a few times whilst screaming) and the doors wouldn’t open. A voice announced on the speaker that the doors were out of order and that we would have to use the other entrance. I got really panicky and started bashing on the doors and screaming, so Lee helped me walk to the other doors, which were only about 20m away.

I had an eye mask on, as reducing the light and any external distractions helped me to stay focussed, and a huge fluffy dressing gown and ugg boots and looked like a total crazy lady. I had a few more contractions in the foyer of the hospital, screaming and banging my fist on the walls, and the emergency room nurses rushed over and said, ‘You must be Emma, we’ve been expecting you!”

We finally made it to the birth centre and the midwives took me straight into the suite and up on the bed. I hadn’t met the midwife on duty, Sue, which took me by surprise a bit as I thought I had met most of them. At first she seemed old, matronly and abrupt, but she turned out to be awesome. I later found out that she is nearly 70 and has been a midwife for 50 years. She helped set up the birth centre model of maternity care and was a huge advocate in the seventies for natural birthing and drug-free labour. She has delivered thousands of babies and seriously knows her stuff.

Sue examined me and said that I was already 9cm dilated. This was so relieving, because if I was any less than 6cm I wasn’t sure how much longer I could keep going for. We had planned on staying at home for as long as possible, which was great, but in retrospect probably should have gone to the hospital a bit earlier!

I stripped naked and got into the shower on all fours. As soon as I got down on the ground, I got the urge to push. This was at about 3.30am. I started breathing and screaming and singing random tunes and grunting. Once the pushing urge came, I felt a lot better. The pain seemed more focussed and I felt more in control, like I had a job to do instead of just coping with the pain. There was also a bit more space between the contractions.

My mum had arrived at this point. It was really good having her there, to provide back-up for Lee and just for extra comfort for me.

Before the labour, I was adamant that I didn’t want to be totally naked and exposed to the world and that I wanted to keep a nightie on. I didn’t want to use a mirror to see anything and I didn’t want Mum or Lee to see all my bits. Well, all that went out the window pretty quickly! I was on all fours with my ass in the air, a mirror on the ground so the midwife could see what was happening, and Lee and Mum able to see everything. No shame!

I pushed in the shower for a while, then the midwife decided that I would be better off on the bed so we put the bed at an angle and I leant over it on all fours. She could see the baby at this point, so I knew there wasn’t far to go. My waters still hadn’t broken yet though, so he was still encased in the amniotic sac. I pushed here for a while but he was getting a bit stuck, so I moved onto the floor onto a birthing stool, which is a c-shaped stool. I was leaning over the edge of the bed and pushing with all my strength. Archie started crowning, which felt like hell. The birth classes had warned that I would feel a ‘strong burning sensation’ when the head made an appearance, but it was more like someone had taken a freaking blowtorch to my ladyparts!

After about twenty minutes of strong pushing, he popped out onto the mattress on the floor. Lee picked him up and handed him to me, then cut the umbilical cord and I climbed back on the bed for his first feed.

The feelings upon seeing him for the first time were completely overwhelming. I had a huge wave of love and excitement and exhaustion and sheer joy. It was total euphoria. Partially because I had just given birth to a healthy baby boy, and partially a huge relief that the labour was over. My first thought was that he seemed huge compared to other newborn babies, but I was rapt that he was so big and healthy and happy-looking.

It is true what they say: nothing prepares you for the love you have for your child. I remember looking at Mum in a whole new light, and thinking “So this is how you feel.” It is fierce, raw and primal. I love Lee, and I love my parents, but the kind of love I have for Archie means I would literally throw Lee and my parents and myself under a bus to protect him.

There was a lot of blood loss after the birth so I had an injection to speed up the placental delivery, which was fairly straightforward and easy. I was on such a high that I couldn’t feel much anyway. There was a little bit of tearing, so I had a few stitches. That was pretty horrible as I had to be in stirrups to have them done, but it was over quickly.

He was born with open eyes and a shock of dark hair. He began crying pretty much immediately, then stopped once he started feeding. I fed him for a while, which was magical. Lee held him while I got stitched up, then I had him on my chest for some skin-to-skin contact. My dad, Lee’s mum and my brother all came in. I was still on such a high, I wanted to show him off to everyone.

I was pretty terrified about the labour and birth, especially in the last few weeks of pregnancy, so I’m happy that it was pretty cruisy. There was no moment that I thought that I couldn’t do it or that it was too much. I had gone into it with the ideal situation being that I had no drugs, minimal intervention and lots of involvement from Lee, but I was prepared for things not going to plan. I am rapt that the ideal situation turned out to be what actually happened. I couldn’t have asked for a better labour and birth, and I ended up with the most perfect baby boy, which is all that really matters.

One thought on “Archie’s birth story.”

What's on your mind? Cancel reply 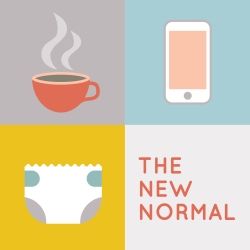